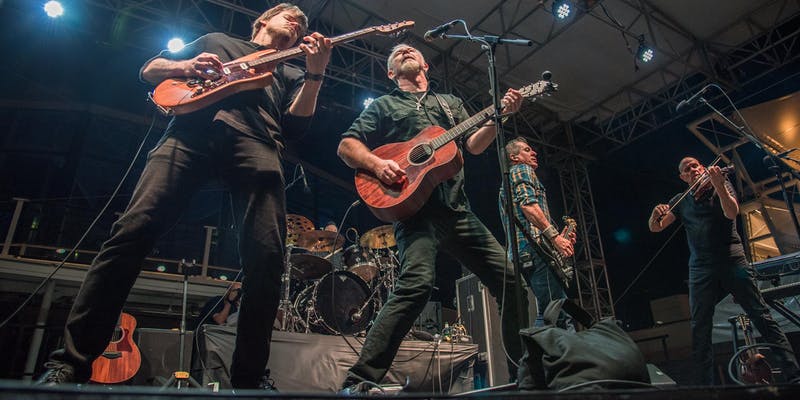 The Young Dubliners will spend April of 2019 working on their tenth album. After another highly successful winter tour the band will take some time off the road to finish up writing and start demoing new material. “It’s been quite a while since our last album (Nine) was released. We had a major delay in the process when we had to work in new guitarist Justin Pecot and get him familiar with the nine albums of material we already have “ says lead vocalist Keith Roberts. “After a year of solid touring I’m happy to report that he is a Young Dub through and through”
Adding new blood has invigorated the band and opened the door to new songs and a fresh enthusiasm.
In May 2019 the band will start touring again and give the new material a good “road test” before hitting the studio in the late Fall to begin recording.
The Young Dubliners have released eight albums of original material and one Irish ballad cover album to date. Their live set will draw from all their albums and the new material. It will be geared to the many festivals the band plays every summer with the usual upbeat, energetic delivery the Young Dubs are known for.
In recent years the band have appeared on ABC’s Jimmy Kimmel Live!, had songs featured in TV shows (Sons Of Anarchy, Human Target) and toured extensively as a headliner and as the opener for such a diverse list of artists as Collective Soul, Jethro Tull, Johnny Lang, Los Lobos, Chris Isaak and many more.
Although the Young Dubliners sound is most commonly called ‘Celtic Rock’, that label, as labels can often be, is misleading. The Irish influence is there, certainly, but it’s not the only influence that rears its head on their albums, or in live shows. After all, several of the band members have no Irish roots of any kind. “That was always the idea”, explains Keith. “The sound was always intended to be a hybrid because we all come from such different backgrounds. Even though two of us are from Ireland, a lot of the music we listened to growing up wasn’t Irish at all. When we got here we got homesick and developed a new appreciation for Irish Music. In truth the Celtic riffs can just as easily come from the American band members. Everyone writes now so you never know what you’ll end up with. These sessions will be made even more exciting by the addition of Justin who has already started contributing to the writing process.
The Young Dubliners are.
Keith Roberts. Vocals / Acoustic guitar
Chas Waltz. Violin, Mandolin, Harmonica, vocals
Brendan Holmes. Bass guitar / vocals
Justin Pecot. Lead guitar / acoustic guitar/ mandolin/ vocals
Dave Ingraham. Drums / percussion

Black Mountain Symphony
Black Mountain Symphony showcases an eclectic range of influences, blended together to create their own special sound. From baroque classical violin and haunting folk-tinged ballads to funk-rock drums and hard-hitting dance numbers, the six-piece band sprinkles their live sets with hints of everything from classical music to bits of Celtic rock, Folk, and New Age.
Whether touring nationally or performing at their favorite local digs, this group of musicians features a roundtable of powerful lead vocals and harmonies that dance with captivating violin lines and soar over stunning soundscapes, shaped by years of classical training infused with an irresistible love for musical roots and a fresh, ultramodern mentality.
Evocative of such artists as Fleetwood Mac, The Corrs, Yes, Belle & Sebastian, Damien Rice, Guster and The Dave Matthews Band, the group implements the same skill and vision on cover tunes as they do in their own carefully crafted compositions, and in the process manage to capture something unique and refreshing… This is Black Mountain Symphony.
Charlie Burgess: Vocals, Guitar, Native American flute.
Annie Campo: Vocals, Violin;
Bear Campo: Vocals, Piano, Keyboards;
Chris Peppe: Guitar;
Bill Palinski: Vocals, Drums;
Nick Graziade: Bass; Vocals