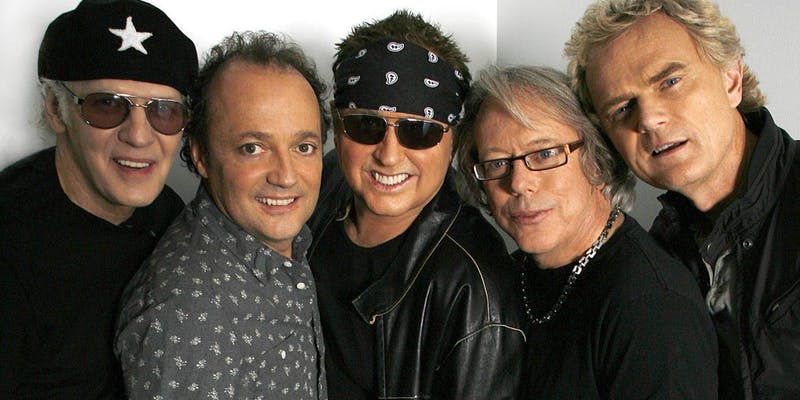 For more than 30 years, LOVERBOY has been “Working for the Weekend” (and on weekends), delighting audiences around the world since forming in 1978, when vocalist Mike Reno was introduced to guitar hot shot Paul Dean – both veterans of several bands on the Canadian scene – at Calgary’s Refinery Night Club.

After being rejected by all the major U.S. record companies, LOVERBOY signed with Columbia Records Canada, entering the studio with producer Bruce Fairbairn and engineer Bob Rock to record their self-titled debut album, which went on to sell more than 700k records in Canada. Columbia U.S. released the album in Nov. 1980, which went on to sell more than 2 million albums in the States and four million worldwide.

Soon the band found themselves playing on mega tours with Journey, Bob Seger, Cheap Trick, ZZ Top, Kansas and Def Leppard, to name a few. They quickly became MTV darlings, being one of the first bands ever featured on the music channel.

With their trademark red leather pants, bandannas, big rock sound and high-energy live shows, LOVERBOY has sold more than 10 million albums, earning four multi-platinum plaques, including the four-million-selling Get Lucky, and a trio of double-platinum releases in their self-titled 1980 debut, 1983’s Keep It Up and 1985’s Lovin’ Every Minute of It. Their string of hits includes, in addition to the anthem “Working for the Weekend,” such arena rock staples as “Lovin’ Every Minute of It,” “This Could Be the Night,” “Hot Girls in Love,” “The Kid is Hot Tonite,” “Notorious”, “Turn Me Loose,” “When It’s Over,” “Heaven In Your Eyes” and “Queen of the Broken Hearts.”

LOVERBOY went on to win a still-record six Juno awards in 1982, and until a three-year sabbatical in 1989, were one of the Top 5 grossing touring acts in the world, performing in over 100 cities across the U.S. and Canada. Their success made them the first Canadian group ever to earn Columbia Records’ exclusive Crystal Globe Award, celebrating the sale of over five million albums outside their native country. Since 1992, the band has maintained a steady road presence, with Sony/Legacy releasing a greatest hits compilation, LOVERBOY – CLASSICS, in 1993, which went gold five years later. In 2001, the band released a live greatest hits CD, Live, Loud & Loose, which captured the group doing what they do best, entertaining their legion of rabid fans.

In 2005, LOVERBOY celebrated 25 years together by performing in selected cities throughout the U.S. and Canada. During the summer tour, the band introduced a couple of brand-new songs, which led to Just Getting Started, their first new studio album in a decade. In March 2009, the group was inducted into the Canadian Music Hall Of Fame at the Juno Awards show at GM Place in Vancouver, BC, where they joined the likes of Bryan Adams, Leonard Cohen, Neil Young and David Foster.

Along with Reno and Dean, LOVERBOY still includes original members Doug Johnson on keyboards and Matt Frenette on drums, with Ken “Spider” Sinnaeve (a former member of Dean and Frenette’s pre-LOVERBOY band Streetheart), replacing the late Scott Smith on bass, and continues a healthy touring schedule around the world.

“Being in a band is kind of like being on a team,” says Reno. “Everywhere we go, we try to make it look and sound good.”

Unfinished Business is the latest Loverboy album released in 2014. The title came from Dean’s idea to involve the band’s fans in choosing the name of the album in a popular vote on Facebook, where the choices were first winnowed down to 10 and then opened up to Loverboy’s followers, who chose Unfinished Business, giving it the most “likes.”

“We put the song titles up and explained that this album was 40 years in the making,” says Dean. “It was a fun thing. Some of the titles they came up with were hilarious, but maybe a little inappropriate for Wal-Mart.”

More recently, Loverboy has released a trio of singles. These include 2016’s “Hurtin,” and “Some Like It Hot,” as well as 2017’s “Stop the Rain.” In February of 2017, Dean caught national attention when he announced an opportunity for fans to create the official “Stop the Rain” music video and win one of his own signed guitars. After many submissions, the band chose David Napolillo’s video, and Paul revealed his affinity for science fiction by thanking him for “Abducting Loverboy into the ‘Alien Hall of Fame.’”

Their pop culture credibility was cemented by a recent 30 Rock episode in which Scott Adsit’s amateur musician Pete Hornberger amusingly revealed he was actually Loverboy’s original bassist, showing him inserted into vintage ‘80s footage of the band wailing away on “Working for the Weekend.” The song is also known as the soundtrack for a memorable Saturday Night Live skit in which Chris Farley and Patrick Swayze played Chippendales dancers who performed to it at an audition.

Loverboy caught corporate America’s eye, first with Radio Shack’s Super Bowl commercial in which “The ‘80s called… they want their store back,” and some of that decade’s most popular groups take over the retailer, set over a soundtrack of Loverboy’s “Working for the Weekend.” CNN praised the spot, calling it “pure commercial genius… a spot-on piece of creativity,” crediting it with “saving a lame” game.

Then there’s the widely-seen Taco Bell spot promoting their breakfast waffle taco, which features a prominent mention of a consumer, “Taking down his Loverboy poster” as part of an unabashed pitch to those who grew up in the ‘80s and are now smack in the middle of the desired advertising demo.

Most recently, Loverboy appeared in Enterprise’s National Car Rental commercial with Patrick Warburton (Seinfeld character, David Puddy) who jokingly admits his hardcore affinity for the band by stating that he was “President of the Loverboy-Lover’s Club – California Chapter.” The commercial was seen by millions when it kicked off Sunday Night Football for the NFL’s 2016-17 season.

But it is LOVERBOY’s reputation as a live act which has always been its calling card, as the group continues to entertain fans of all ages, amazing even Mike Reno.

“Something’s in the water,” he says. “I go to these concerts expecting there to be 3,000 people, and there’s seven or eight thousand people! And most of them are young! Even kiddies, like 10 years old. They even know all the words. It’s freaking me out.”

“I look at our concerts as a 100-minute experience,” says Dean, who laughingly still claims to be able to fit into the same pair of red leather pants he wore on the “Lucky Ones” video in 1982. “I’m a normal guy up until 10 minutes before we hit the stage. Then the heart rate goes up and I consciously step into the bubble. And I don’t come out of it until 30 minutes after that last cymbal smash and we walk off-stage. It’s a great stress release, even better than riding a Harley!”

In 2016, Loverboy and Rick Springfield toured together which culminated in a sold out show at L.A.’s iconic Greek Theater. Additionally, Loverboy’s 2017 tour includes headlining events such as the United States’ M3 Rock Festival, Canada’s CannaFest, and the UK’s Rockingham Festival.

“When we do live shows these days, I notice the songs have come to a better place,” says Reno. “We’re playing them a little differently, but the catalyst is still the same. We live these songs—they’re part of our DNA, and they’re part of a lot of people’s DNA. They send us a lot of love and we end up loving them back, so it’s just a big love-fest, really.”

Perhaps the band’s most famous song is “Working for the Weekend,” which has fueled a generation’s dreams of toiling every day for the chance to celebrate come Friday night. Dean realizes it has taken on a whole new meaning these days.

“You’re lucky if you can work for the weekend now,” he says. “We’re all fortunate to be doing that. My personal dream has always been to play guitar and entertain people,” he enthuses. “There’s no feeling like looking out in the audience and seeing them grinning ear to ear, everyone on the same wavelength. And once we start with the mega-hits, the place goes crazy. That’s why we do what we do and will continue.” 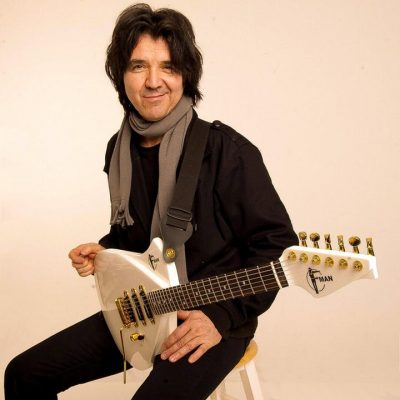 Boston Rock Legend CHARLIE FARREN has long been known for great songs, great singing, and for outstanding live performances. Currently touring solo acoustic, Farren captures the audience with his unique delivery, insightful lyrics, soaring vocal, and distinctively intricate, ‘Full Band’ guitar style that distinguishes him among the country’s elite musical artists.
Farren burst onto the national scene in the early 80’s as lead singer of THE JOE PERRY PROJECT, teaming up with Aerosmith lead guitarist Joe Perry and releasing an acclaimed album on Columbia Records. Farren penned the Billboard charting classics “Listen To The Rock” and “East Coast, West Coast”, also co-writing four songs with Perry including the hit “I’ve Got The Rock ‘N’ Rolls Again”.
As lead singer & rhythm guitarist of The Joe Perry Project, Farren established himself as one of the hottest young singers to emerge from the Boston music scene. The Joe Perry Project sold out venues throughout the country and toured North America with artists such as Ozzy Osbourne, Heart, ZZ Top, Alice Cooper and Rush.
In 1986 Farren formed FARRENHEIT, releasing a self-titled debut album on Warner Brothers, produced by Keith Olsen. Three singles from that album, “Fool in Love”, “Bad Habit”, & “Lost in Loveland”, as well as video exposure on MTV, established FARRENHEIT as one of the premier new rock acts. FARRENHEIT landed the coveted opening slot on the 75 date BOSTON ‘Third Stage Tour’ – sold out from coast to coast, and performed at the 1987 “Texxas Jam” to a sold out crowd of 85,000 people at the Cotton Bowl in Dallas.
Charlie Farren has appeared on Bad Company’s 1986 LP “Fame and Fortune”, Nona Hendryx’s 1985 RCA album “The Heat”, Peter Wolf’s 1996 CD “Long Line”, as well as Joey McIntyre’s 1999 release “Stay the Same”.
Now working on what will be his 17th release, Farren has been described as contagious, displaying a candor rarely demonstrated by former arena rock stars. “It’s clear he has not lost the ability to captivate a room full of people no matter what the size,” writes Tom Dempsey of SoundCheck magazine. His live solo performances remain the perfect forum for his remarkable talents. Charlie Farren continues to be one of America’s most original and compelling musical artists. He takes the stage alone – and leaves the stage with a roomful of new believers.